This time we will be doing a pure stock Debian 9 Stretch aarch64 that the PinebookPro ships with. I always keep the stock system installed on the eMMC and use other systems off the microSD (Manjaro, NetBSD) I have kept this because Debian 9 ships with a 32bit userland and 64bit kernel, and some games/programs are just not ready yet for 64bit space (which Manjaro aarch64 is – the code builds there but crashes and I need to figure out why )

This time we will build a native Linux 32-bit ARM launcher for Half-Life 1 called xash3d and play Half-Life and some of the mods – namely the legendary Counter Strike 1.3 and 1.6 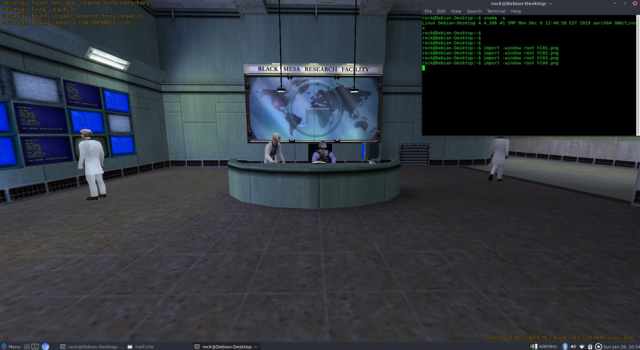 There is a detailed howto on the project’s Github page already (https://github.com/FWGS/xash3d/wiki/Building-and-running), but we will just go through the steps here

You will need the standard Debian development tools/SDL2-dev/cmake

We have compiled the xash engine, lets get the game done now

Now we need to prepare the actual Game Data and move them from an installed Windows or Wine environment.
You can download the Half Life 1 ISO from Archive.org and install it in Wine on x86_64 Linux or Windows in Qemu :)

The game runs fine and multiplayer works well too.

The approach is the same, install the CounterStrike on Windows Qemu or under Wine and copy over the scstrike directory to ~/HalfLife on the Pinebookpro

As of now the Counter Strike 1.6 does not work well, you can run around the maps as Gordon Freeman, With 1.3 its better, one can connect to the public servers but cannot choose the team (CS or T) .. need to investigate that ..

Perhaps this could be compiled  natively on the Pinebookpro aarch64 Debian9 so that Counter Strike could be fully playable on this platform.

Please run Adblock or similar... we have been told to do so since Carl Sagan wrote the Contact .
View all posts by astr0baby →
This entry was posted in Uncategorized. Bookmark the permalink.

This site uses Akismet to reduce spam. Learn how your comment data is processed.